John Legend: Live at the House of Blues 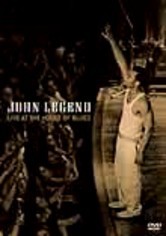 John Legend: Live at the House of Blues

2005 NR 1h 46m Blu-ray / DVD
This concert video captures John Legend's smokin' live gig at the Los Angeles House of Blues in August 2005. In addition to performing such crowd-pleasers as "Ordinary People"and "She Don't Have to Know," Legend teams with special guest Kanye West for "Number One" and with Snoop Dogg for "I Can Change." Bonus material includes the video for "So High," an interview with Legend and behind-the-scenes footage.