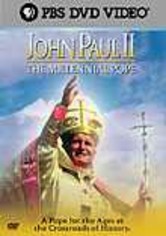 1999 NR 2h 26m DVD
Karol Wojtyla, known all around the world as Pope John Paul II, has led the Catholic Church for more than two decades. This episode of the award-winning public television series "Frontline" examines the pope's pre-Vatican life, his views on faith and religion and his relationships with Jews and modern Catholics.