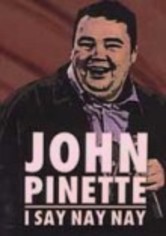 2004 NR 1h 0m DVD
John Pinette has been cracking up audiences around the world for more than 15 years. He was named Stand-Up Comedian of the Year by the American Comedy Awards in 1999 and has received a Gemini Award nomination for his superb televised performance at The Montreal Comedy Festival in 2000. This video was recorded at the Tempe, Ariz., Improv in 2004 and includes the bonus feature "You Go Now" (Pinette's 1992 appearance on Fox's "Sunday Comics").