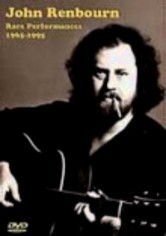 2003 NR 1h 30m DVD
Tracing his musical evolution from London basement clubs to his collaborations with Stefan Grossman and Bert Jansch, this documentary highlights 30-plus years of fantastic performances by acoustic guitar master John Renbourn. Among the featured selections are "Travelling Song, Let No Man Steal Your Thyme," performed with Pentangle in England in 1968, and "The Fair Flower of Northumberland," performed in the U.S. in 1981.