Johnny Cash: The Man, His World, His Music 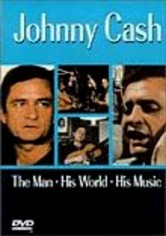 Johnny Cash: The Man, His World, His Music

2000 NR 1h 30m DVD
Much of this never-before-seen footage from the 1960s plays like a home movie, with rare glimpses of the Man in Black, both onstage and off. But whether he's among fans, friends or family, he's straight-up Johnny Cash. Performances of 21 songs include "Ring of Fire," "Long Black Veil" and "Where Were You When They Crucified My Lord?" -- plus notable duets with wife June Carter Cash, guitarist Carl Perkins and Bob Dylan.