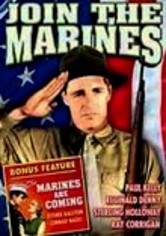 1934 NR 2h 18m DVD
It's Semper Fi or Die with this Marine Corps double feature. In Join the Marines, Phil Donlan strives for Olympic glory until he meets a colonel's spoiled daughter and enlists to impress her and gain her father's approval. In The Marines Are Coming, old rivals Lt. "Wild Bill" Traynor and Capt. Edward Benton must set aside their differences and team up to escape the Mexican bandits that have taken them prisoner.