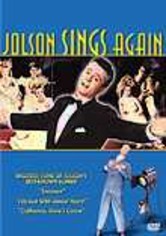 1949 NR 1h 48m DVD
Larry Parks returns in the title role in this sequel to The Jolson Story. After realizing he's not ready to retire after all, Jolson stages a comeback. But times have changed, and his style appears to be out of touch with what the public wants. Defeated, Jolson heads overseas to entertain the troops, where he meets a nurse (Barbara Hale) who not only "nurses" his heart, but also convinces him to return to entertainment.