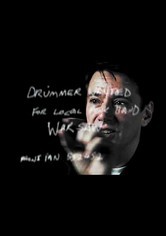 2007 R 1h 33m DVD
Director Grant Gee provides a cultural portrait of Manchester, England, during the 1970s as he examines the rise and fall of the punk band Joy Division. The film charts the history of the group, its members and musical inspiration. The anger and despair felt by much of England's youth found its way into the lyrics and violent instrumentation of Joy Division's songs, an artistic expression that was more than just rebellion.