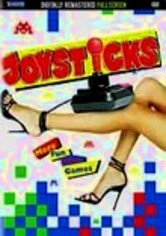 1983 R 1h 23m DVD
Trouble rears its ugly head at the video arcade in this racy teen comedy about a group of kids who battle businessman and concerned parent Joseph Rutter (Joe Don Baker), who believes that video games will destroy the youngsters' minds. When he tries to close down the popular hangout, it's up to King Vidiot (Jon Gries), nerdy Eugene Groebe (Leif Green) and the rest of the gang to defend their right to play Pac-Man.