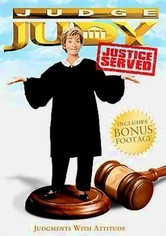 2007 NR 1h 45m DVD
Judge Judy tackles some of her most unforgettable, bizarre and scandalous cases in these episodes from her hit television courtroom series. Known for her tough-as-nails attitude and penchant for scolding litigants she finds unreliable, irresponsible or just plain stupid, Judge Judy Sheindlin presides over small-claims cases in her show, which premiered in 1996 and soared to popularity.