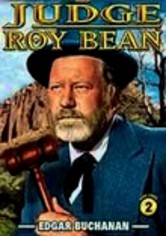 1956 NR 1h 40m DVD
Doling out gallows punishment from his saloon courtroom, the legendary "hanging judge" Roy Bean (Edgar Buchanan) returns in this collection of episodes from the television series based on the true-life tales of the fierce Texan. Aided by his niece Letty (Jackie Loughery) and Deputy Jeff Taggert (Jack Beutel), the judge dispenses justice in four 30-minute episodes: "The Eyes of Texas," "Outlaw's Son," "Sunburnt Gold" and "The Runaway."