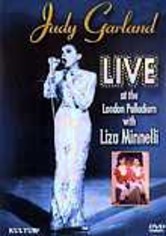 1963 NR 0h 55m DVD
On Nov. 16, 1964, Judy Garland walked onstage at the London Palladium and gave a performance that captured everything that was magical and unforgettable about her. Garland sings many of the tunes she's made her own, including "Over the Rainbow." She also delights the crowd with "Just in Time," "Hello Dolly," "It's Just a Matter of Time" and "The Man That Got Away," and is later joined by her daughter, Liza, in their first official public duet.