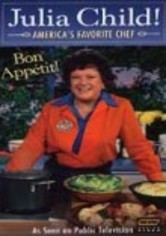 2004 NR 1h 0m DVD
Celebrate Julia Child, who taught Americans -- with her long-running show, "The French Chef" -- to love fine French cooking without being daunted by its intricacies in this fascinating documentary, part of the "American Masters" series. While her show aired on public television, the chef enticed beginners to take up pans and inspired veterans to give the complex Continental cuisine a chance, revolutionizing the way Americans approached dining.