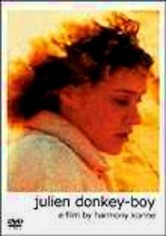 1999 R 1h 40m DVD
Writer-director Harmony Korine delves into the mind of a schizophrenic teen in this surefire indie classic. Julien (Ewen Bremner) lives with his pregnant sister (Chloë Sevigny), his wannabe-wrestler brother (Evan Neumann) and their abusive father (Werner Herzog), who chugs cough syrup and wears a gas mask. Presented as a series of vignettes, this film shows the fragmentation of Julien's mind as he grapples with conflicting realities.