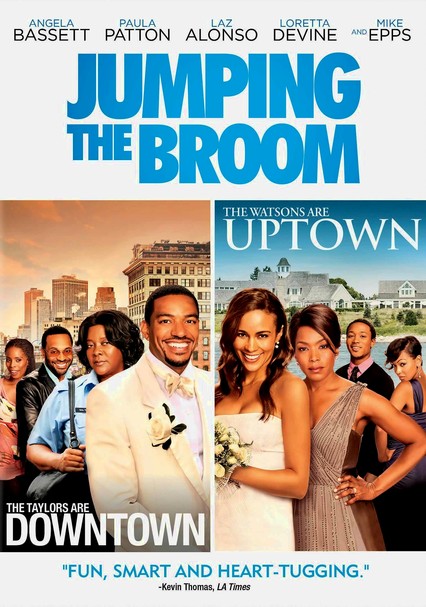 2011 PG-13 1h 52m Blu-ray / DVD
It's a comedic clash of African-American cultures when the hoity-toity clan of bride Sabrina Watson and the proudly blue-collar family of groom Jason Taylor gather on Martha's Vineyard to celebrate the couple's nuptials.

Parents need to know that this wedding comedy was produced by evangelical preacher TD Jakes. It includes some kissing and discussion of premarital sex/celibacy, but at heart it's an uplifting story about the importance of love, family, and tradition. There are a couple of shots of characters (both male and female) in their underwear, but the action is limited to a few sexy smooches. Language is mild for a PG-13 film, and there's no violence outside of a football match that leaves the groom flat on his back. Some of the issues -- classism within the African-American community, mothers who hate every woman their son brings home, teen mothers forced to give away their babies -- are a bit mature for younger audiences, but the movie could prompt discussion about romantic and family relationships.

The movie opens with Sabrina fastening her bra; she's later shown in her bra and panties, as is one of the bridesmaids. Jason's uncle and cousin flirt boldly with Sabrina's aunt and bridesmaids. Sabrina's aunt sings Marvin Gaye's "Sexual Healing" in a skimpy dress. The caterer and a bridesmaid kiss and are caught in their lingerie and underwear. The bride and groom kiss passionately a few times. Bridesmaids wonder whether the groom is on the "downlow" or cheating, since the bride-to-be has insisted on premarital celibacy. Teen motherhood is referenced in the story.

Some mild pushing and shoving during a touch football game.

Language includes "damn," "hell," "hook up," and "oh my God," plus insults like "stupid," "loser," and the terms "bougie" and "bootstrapper," which are used derogatively to mean "upper class" and "self-made."

Many of the movie's messages center around faith (the film was produced by an evangelical preacher). It also emphasizes the importance of respecting your parents but knowing when it's OK to disagree with them; being truthful with the people closest to you, even if it's hurtful; trusting your children to make the right decision; and not judging others based on their social status or education.

BlackBerry, Prius, Land Rover, Polo, Lacoste, and a few other brands are on display in the movie.

Adults are shown with champagne and other drinks at meals and a reception. The wedding party drinks at a bar/restaurant, where one groomsmen says the groom should get "wasted." Sabrina's aunt acts drunk before she takes the stage.