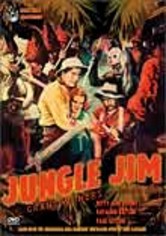 1936 NR 2 discs
Based on the popular comic strip created by Alex Raymond, this 12-part movie serial follows the adventures of the courageous titular character (Grant Withers) as he journeys to the jungles of Africa to rescue a fair maiden by the name of Joan (Betty Jane Rhodes). But when Jim finally locates Joan, he discovers that she's been brainwashed by the evil Cobra (Henry Brandon) and led to believe that she's the queen of a tribe of natives.