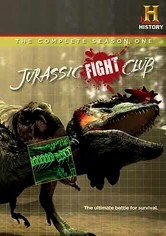 2008 NR 4 discs
Using realistic computer graphics, this program brings to life 70-million-year-old dinosaurs and has them engage in epic battles, while scientists and experts present insightful commentary on their thoughts, behavior and strategies. First season highlights include a Nanotyrannus attacking a Tyrannosaurus Rex, an Allosaurus squaring off against a Ceratosaurus and an Albertosaurus pair confronting a Pachyrhinosaurus herd.

Parents need to know that this educational series recreates some very intense dinosaur battles, using computer graphics to show them fighting to the death. It's more educational than scary, but some of the scenes do get rather gory, including shots of bloody dino fangs and images of the winners feasting on their victims' carcasses. But the CGI blood and gore probably won't scare dino-loving young viewers -- in fact, it may even be a key draw for some of them, pulling them in as they learns some pretty complex scientific concepts.

Plenty of graphic computer-animated dino-on-dino action, often including fights to the death. There's biting, clawing, scratching, and more, and the losers usually end up as lunch. There's some blood, but it's also CGI.

The show is quite educational, with the experts explaining in fascinating detail the instinctive drives that prompted dinosaurs to attack each other (though these needs rarely go beyond mating or feeding).

Many of the experts are identified by their university affiliations.