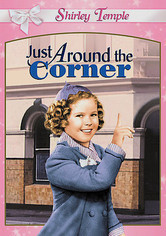 1938 G 1h 10m DVD
Convinced that an Uncle Sam look-alike (Claude Gillingwater Sr.) can end the Great Depression, a precocious young girl (Shirley Temple) charms him into giving her once-prosperous father (Charles Farrell) a job. Bert Lahr (The Wizard of Oz) and the legendary Bill "Bojangles" Robinson co-star in this musical tug of the heartstrings with a sweet-but-improbable plotline. The film was one of Temple's final performances as a child star.

Parents need to know that Just Around the Corner is an old-fashioned, feel-good Shirley Temple movie (with music and dancing) about a little girl who is an uplifting force-of-nature, making everyone around her happy and more optimistic. It takes place during the American Depression in New York City; most of the rich people are portrayed as snooty and uncaring; the poor work hard and make the best of a bad situation. Expect a couple of cartoon pratfalls -- an uptight villain is sent down a laundry chute, a brief brawl between poor street kids, and a scene showing police with guns. The only non-white characters in the film (as was typical in a movie made in 1938) are African-American dancing doormen.

Comic action only. A short fight and wrestling match between two gangs of kids. The children play cops and robbers and a little girl wields a toy rifle. The movie's bad guy -- a fussbudget apartment manager -- is tossed into a laundry chute. Police sent to thwart a benefit musical performances carry guns.

A positive attitude, hard work, and determination can work miracles. The ever-optimistic Shirley Temple character speaks for children of any era when she asks simple, but profound questions: "Why can't people be nice to other people?" and "Why is everything mixed up?" A leading character's firm and unchallenged definition of a banker is "someone who keeps things that belong to other people."