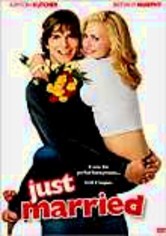 2003 PG-13 1h 35m DVD
After falling in love at first sight, Tom (Ashton Kutcher) and Sarah (Brittany Murphy) decide to get married, even though they come from opposite worlds. He's an alpha male from a blue-collar family; she's a blue-blooded writer with a free spirit. When they go on their honeymoon, however, their not-so-obvious differences bubble to the surface and threaten to shorten their newfound "happily ever after."

Parents need to know that while there's no nudity in Just Married, there are frequent sexual references and situations, some graphic, and some raunchy, including an attempted sexual encounter in an airplane bathroom and overheard sex in the next room. Characters drink a lot, often to help themselves feel better when they are upset. A character refers to regrets about having sex with someone after drinking too much champagne. There is strong language (and much attempted humor from the name "Pussy").

Many sexual references and situations, many graphic.