Just the Facts: The Executive Branch of Government 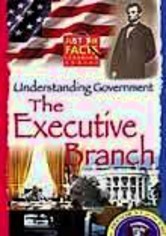 Just the Facts: The Executive Branch of Government

2004 NR 0h 50m DVD
Get a close-up look at the most powerful branch of American government -- the executive branch. This fascinating program analyzes the powers of the president from a legal and historical point of view in a fast-paced, fun way. You'll see how past presidents had varying opinions on the exact scope and parameters of their own power -- and how a few overstepped those bounds, including Abraham Lincoln, Franklin Delano Roosevelt and Richard Nixon.