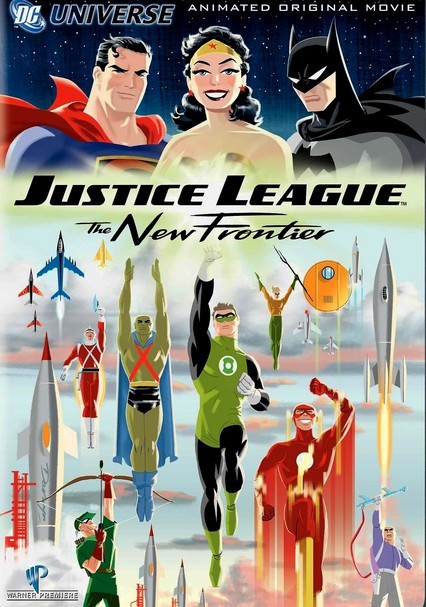 2008 PG-13 1h 14m Blu-ray / DVD
An all-star cast provides the voices of Superman, Batman, Wonder Woman and other classic superheroes in this animated epic that reveals the origins of the Justice League, a group of strangers united to fight an evil none can conquer alone.

Parents need to know that this is a violent cartoon, with blood and dead bodies shown, and a little boy threatened with cult sacrifice -- although the worst of the gore and severed body parts seems reserved for monsters (specifically, mutant dinosaurs). There are two close-up fatal shootings and some light swearing. The PG-13 rating is possibly a little harsh, considering the fantasy nature of the material, but the feature does touch on some unsavory aspects of the 1950s, such as racism, the Korean War, and US government paranoia and treachery.

Blood flows from superhero and mortal injuries, and dead bodies are seen. Opening scene depicts a suicide-by-gun from the victim's POV. A dinosaur's head explodes, and monsters get dismembered. A little boy is threatened as a human sacrifice. Wonder Woman makes a brief, euphemistic reference to rape.

The characters here are all brave and noble, even as they disagree among themselves on how to go about the superhero business. There's a strong sense of teamwork and mutual respect among the heroes, and these good guys even come through when the public, military, and government persecute them. There's a somewhat negative portrait of the US in the 1950s as paranoid, homicidally racist, and conformity-ridden.