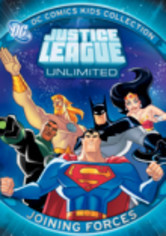 2004 NR 1h 8m DVD
In this cool collection of animated episodes, D.C. Comics superheroes star in story lines tailored for younger audiences. In "For the Man Who Has Everything," Superman's birthday bash is interrupted by the evil villain Mongul. In "The Return," a dozen of the Justice League's greatest heroes take on Lex Luthor's evil robot, Amazo. And in "The Greatest Story Never Told," an eager superhero from the future unknowingly saves the day.