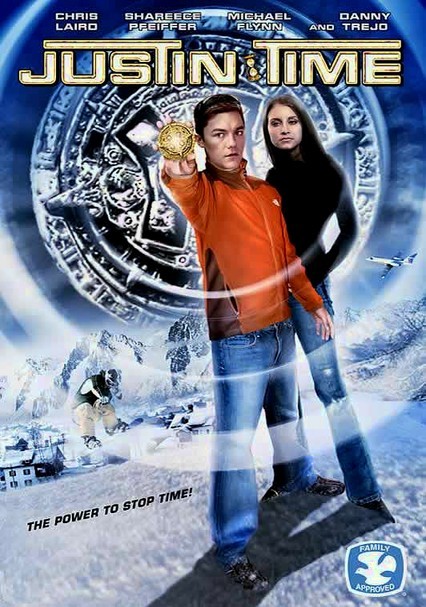 2009 NR 1h 30m DVD
This adventure-filled family series tells the story of 18-year-old Justin (Chris Laird), a Shoshoni Indian whose world is shattered by his parents' deaths. Justin inherits his father's magical amulet and is astounded to learn that it can control time. The other half of the amulet is owned by a shady businessman, who's using its powers for personal gain. Justin must decide how to use his new abilities and whether the two halves should be united.

Parents need to know that this teen adventure has some confusing messages about race. While Justin is insulted by kids for being an "injun," his white adoptive parents tell him to be proud of his Native American heritage -- yet all the bad guys in the movie are either Native American or African American. There is some fighting, including school bullying and a chase with guns and knives.

Angelic is ogled and hit on by almost every guy she meets. Kissing scenes.

Thugs chasing after the magic disk and amulet use knives and guns to threaten. Characters are gagged and thrown into the back of cars. High school bullying, including hitting and kicking other kids.

Justin gets bullied at school for being an "injun." He laughs with his white adoptive family about this, while they tell him to be proud of his heritage. Yet the bad guys are Native Americans and African-Americans who will do anything for money. The only female lead is Angelic, who is an object of desire.

Angelic's dad has everything that money can buy, including a private jet. When she wants something she begs her Dad, saying: "Please, Daddy? Can we?" and he gets her what she wants.