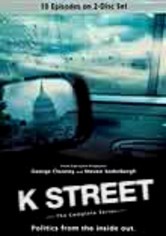 2003 NR 2 discs
Directed by Steven Soderbergh, HBO's 10-episode improvised television series fuses reality and fiction for an entertaining, fly-on-the-wall look at the corridors of power in Washington, D.C. (where the series was filmed). Real-life characters (who appear with fictional characters portrayed by Mary McCormack and John Slattery) include James Carville, Mary Matalin and Michael Deaver, as the story line revolves around a bi-partisan consulting firm.