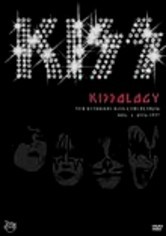 1974 NR 2 discs
Before becoming one of the biggest bands in rock, Kiss played their first gig in their native Queens, N.Y. -- just one of the memorable moments featured in this time capsule of TV appearances and live performances. Focusing on the period between 1974 and 1977, this first volume of a three-part series includes classics such as "Rock & Roll All Nite," "Firehouse," "Detroit Rock City," "Black Diamond," "Deuce" and "Nothin' to Lose."