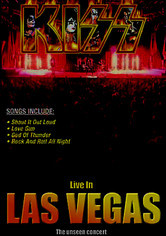 2002 NR 1h 40m DVD
Legendary rock band Kiss serves up their best in this live performance of their biggest hits. Fans of the heavy metal band finally have a chance to see the concert that fate denied them the first time around. This high-energy performance proves that they can indeed live up to the claim, "You Wanted the Best, You Got the Best!!!" Also included is bonus footage of the band members promoting their first theatrical film, Detroit Rock City.