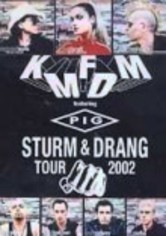 2002 NR 1h 0m DVD
After temporarily transforming themselves into MDFMK, industrial music veterans KMFDM released a new album, "Attak," and went on tour in 2002 to much critical acclaim. This program highlights the 31 sold-out shows the band gave in just 34 days. As much as an assault on the senses as they were in the 1990s, the group rips into tracks such as "Attak/Reload," "Ultra," "Godlike" and "Rules" in footage compiled by front man Sascha K himself.