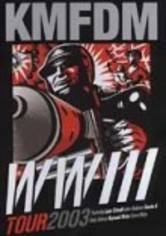 2004 NR 1h 30m DVD
Pioneers in the industrial music field, KMFDM have cemented their position in the hallowed halls of the genre with a prodigious touring and record release schedule. In 2003, they embarked on their "WWIII" tour, combining classic material with newer songs. Features action-packed concert footage, interviews and backstage footage, along with tracks such as "From Here On Out," "Blackball," "Pity for Pious" and more. Note: Contain explicit content.