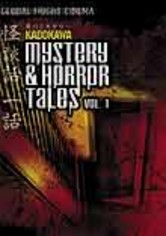 2003 NR 1h 45m DVD
A young girl must protect her fragile sister from a mysterious spirit in this collection of three chilling stories from Kadokawa, the Japanese studio that produced the blockbuster horror films The Ring and The Grudge. In the other creepy tales, a distraught man snatches a child who resembles his kidnapped daughter, and a woman is trapped in her home by a murderer. Sayaka Yamaguchi, Tohru Masuoka and Mayumi Wakamura star.