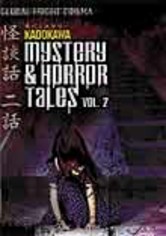 2003 NR 1h 41m DVD
A woman with the ability to regenerate her body makes a shocking request of her new boyfriend in this collection of three chilling stories from Kadokawa, the Japanese studio that produced the blockbuster horror films The Ring and The Grudge. In the other creepy tales, a troubled college graduate falls for a beauty with a horrifying secret, and a young man makes a dangerous pact with a demoness. Naoto Ogata, Tohru Kazama and Aki Maeda star.