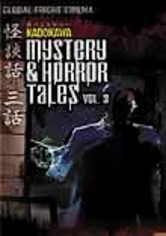 2003 NR 1h 35m DVD
An inexperienced man is seduced by a supernatural femme fatale in this collection of three chilling stories from Kadokawa, the Japanese studio that produced the blockbuster horror films The Ring and The Grudge. In the other creepy tales, a journalist begins to experience strange events after visiting a mysterious tree, and an unstable man falls under the spell of a darker version of his wife. Jinpachi Nezu, Ryuji Harada and Ikkei Watanabe star.