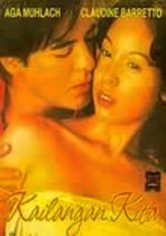 2002 NR 1h 44m DVD
Celebrity chef Carl (Aga Muhlach) returns from New York to marry his supermodel fiancée, Chrissy (Rissa Samson). But the bride-to-be is delayed in Europe, and as Carl makes wedding plans with her family, he finds himself falling for Chrissy's sister Lena (Claudine Barretto). Preparations for the nuptials progress, but will there still be a wedding? And if so, whose wedding will it be? Rory B. Quintos directs this romantic drama.