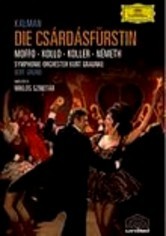 2006 NR 1h 35m DVD
Miklos Szinetar directs this authentic film adaptation of Emmerich Kalman's operetta "Die Csardasfurstin" ("The Gypsy Princess"), filmed on location in Budapest and featuring the vocal talents of opera legends Anna Moffo (an American soprano) and Rene Kollo (a German tenor). The three-act piece, which originally premiered in Vienna in 1915 and became Kalman's most successful work, charts the romance between a cabaret singer and a young count.