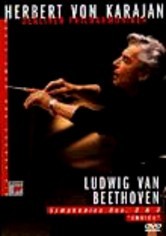 1984 NR 1h 20m DVD
As musical director of the Berlin Philharmonic Orchestra from 1956 to 1989, Herbert von Karajan established himself as one of the 20th century's most prominent musical figures. This video is part of the Karajan "Legacy" series, which documents many of the maestro's definitive performances. In this volume, Karajan conducts Beethoven's "Symphony No. 2 in D Major" and "Symphony No. 3 in E-flat Major."