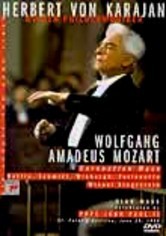 1985 NR 1h 0m DVD
Herbert von Karajan, who led the Belgian Philharmonic for more than three decades until his death in 1989, conducts this moving June 1985 concert filmed in Rome's breathtaking St. Peter's Basilica. Karajan and the orchestra take on Wolfgang Amadeus Mozart's "Coronation Mass," which displays the considerable talents of the composer and of Karajan himself, who managed to tease scores of emotion out of every note.