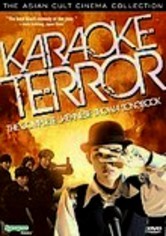 2003 NR 1h 52m DVD
In this dark, cult comedy set to retro karaoke hits, a war for revenge rages between two sects of karaoke devotees when a middle-age divorcée from the Midoris crew is killed by a teenage slacker from the Gakis gang. A generation gap between them, the two groups of malcontents, who share a passion for singing oldies tunes, turn their societal angst against each other in a no-holds-barred battle that leaves only death and destruction in its wake.