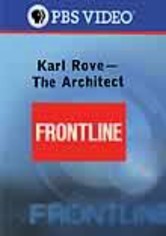 2005 NR
The acclaimed, hard-hitting PBS show "Frontline" takes on Karl Rove, so to speak, in this insightful profile of the man dubbed the architect of President George W. Bush's return to the White House. As chief adviser and strategist, Rove has been a controversial figure in Washington. Get to know the very private politico largely believed to be one of the most powerful men of the Republican party, and see how he made his way to the top of the political chain.