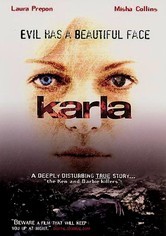 2006 R 1h 41m DVD
Director Joel Bender's disquieting psychological drama stars Misha Collins as Paul Bernardo and Laura Prepon as Karla Homolka, a notorious husband-and-wife team who abducts, sexually abuses and kills three young women. Unfolding from Karla's point of view, the film -- based on a true story -- explores whether she was a willing accomplice to the crimes or merely a victim of Paul's influence. The supporting cast includes Tess Harper.