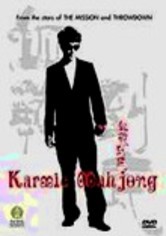 2006 NR 1h 30m DVD
Superstition rules in this crime drama starring Francis Ng as Chen Chuan, a man who believes he's cursed. When a fortuneteller (Yiwei Lau) convinces Chuan that his bad luck has been brought about by one person, he naturally believes it's his wife (Jing Liang), whom he suspects of cheating. His only recourse is to eliminate her and her supposed lover. But can he actually do it, when suddenly everyone around him looks like a potential suspect?