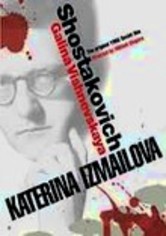 1966 NR 1h 56m DVD
In Shostakovich's dramatic opera, Katerina (Galina Vishnevskaya) is a lonely 19th-century Russian woman who falls in love with one of her husband's servants, driving her to commit murder. Banned in the former Soviet Union for nearly 30 years, this opera is often referred to as "Lady Macbeth of Mtsensk." Conductor Konstantin Simeonov leads the Shevchenko Opera and Ballet Theatre Orchestra in this rendition of Nikolai Leskov's story.