Kathy Griffin: My Life on the D-List 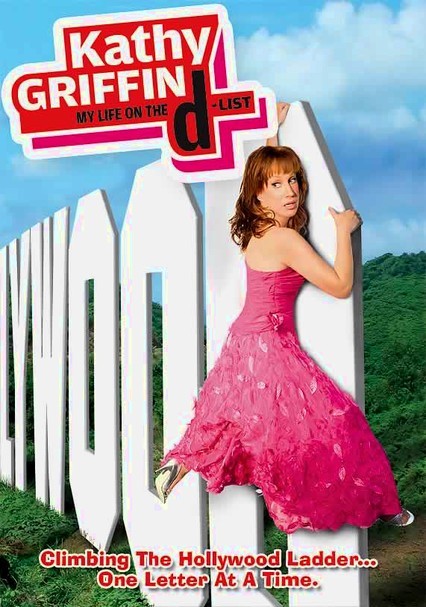 Kathy Griffin: My Life on the D-List

2005 TV-14 4 seasons
Comedian Kathy Griffin navigates the vanity and insanity of Hollywood, scrambling to find her place amid Tinseltown's constellation of stars. Each episode in this hilarious reality series follows Kathy as she tangles with A-list celebs. But the demands of movie stars are nothing compared to those of Kathy's own family. Politics, fame and entourages are all fodder for comedy in this Emmy-winning series.

Comedienne Kathy Griffin takes the gloves off in this Bravo series (based on her one-woman show), dishing on her status in Hollywood and comparing herself to those she classifies as decidedly A-list: the super-rich, super-famous and super-glamorous. In her able hands, however, A- and B-list personalities don't enjoy a rarified lifestyle; instead, they're saddled with exquisitely hilarious foibles.

The second season of this Emmy-winning Bravo reality series opens with bad news all around for Kathy, her longtime husband, Matt, and her beloved dog, Captain. Undaunted, Kathy rallies to turn things around by raising money for charity. But no one's more surprised than Kathy when her publicity stunt -- an eBay auction for an evening with Kathy in her own home -- proves surprisingly lucrative.

In Season 3 of Bravo's hit reality series, a newly single Kathy tries her hand at dating; travels home for her high school reunion; agrees to host the Gay Adult Video Awards; and kicks off a brand-new comedy tour … in prison. The Emmy-winning show chronicles professional D-lister Kathy Griffin's life as a self-described Hollywood bottom feeder in search of A-list validation.

With an Emmy in hand and her eye on winning a Grammy, perennial D-lister Kathy Griffin kicks off another season of her hit Bravo reality series with an ambitious goal: creating an award-winning comedy album. While still seeing Apple co-founder Steve Wozniak, Kathy also heads to Mexico to make over a school library à la Oprah, officiates an unconventional wedding ceremony, and cuddles up to some "bears" of the human variety.

Parents need to know that this reality show about comedian Kathy Griffin features lots of cursing, though the most offensive words are bleeped. The humor is adult-oriented and covers sex, alcohol, politics, and intimate relationships. Griffin makes fun of everybody, including her parents and her fans. Griffin is honest about her search for fame and admits that her occasional altruistic acts are merely hunts for media attention.

Griffin makes jokes about sex occasionally, but nothing graphic.

Griffin curses constantly. The biggies are bleeped, but "bitch," "whore," "ass," etc. are all common.

Social drinking, plus Griffin makes fun of how much her elderly parents drink.