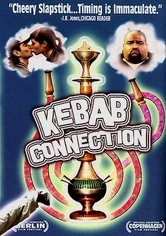 2005 NR 1h 31m DVD
In this airy comedy, budding filmmaker Ibo dreams of helming a German kung fu flick but first hones his talent with a commercial for his uncle's kebab stand. Ibo's ad -- a martial arts parody featuring dueling shish kebabs -- becomes a huge hit. But things go downhill when his girlfriend turns up pregnant, his family gives him the boot, he gets embroiled in a restaurant feud and he attracts unwanted attention from the mob.