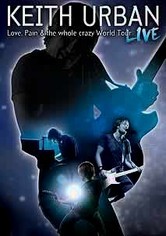 2008 NR 1h 59m DVD
Keith Urban fans will not be disappointed with this jam-packed rock documentary that chronicles the country superstar's 150-date tour, which stretched over six countries on three different continents. In addition to a compilation of outtakes, studio clips and backstage footage, this program features performances of some of Urban's biggest songs, including "Making Memories of Us," "You're My Better Half" and "Days Go By."