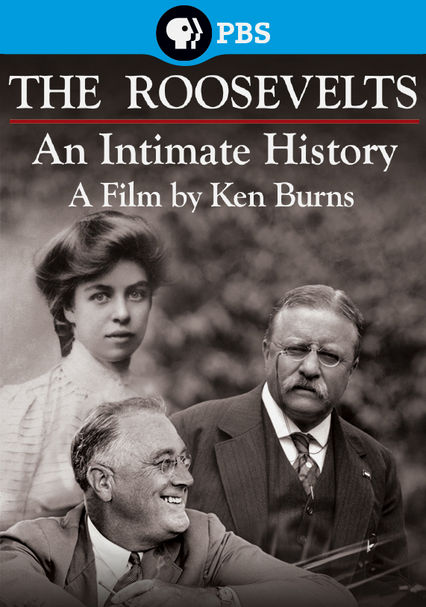 2014 NR 1 season
Ken Burns chronicles the lives of Theodore, Franklin, and Eleanor Roosevelt, three members of the most prominent and influential family in American politics. This series follows the Roosevelts for more than a century.

Ken Burns chronicles the lives of Theodore, Franklin, and Eleanor Roosevelt, three members of the most prominent and influential family in American politics. This series follows the Roosevelts for more than a century.

Parents need to know that The Roosevelts: An Intimate Portrait is a 14-hour documentary miniseries by filmmaker Ken Burns that delves deeply into the lives of Franklin Delano, Eleanor, and Theodore Roosevelt. If parents can convince kids to watch a documentary with visuals composed of talking-head interviews, historical images, and black-and-white footage, they'll find an unparalleled look into the lives of these great historical figures. The only violent content is a few brief shots of animals dispatched by enthusiastic hunter Teddy Roosevelt and battlefield images that briefly show a dead body. Some speculate that Eleanor Roosevelt was a lesbian; the documentary discusses this topic briefly but does not present any conclusions. This series will be fascinating for historians and adult political junkies, though it would be rather dry and slow-going for kids assigned to write a report on one of the former presidents or the former First Lady.

The documentary airs questions about Eleanor Roosevelt's sexuality but does not talk about them at length or make assumptions about her.

There are brief discussions of war and footage and still prints from battlefields; some feature dead bodies (but are not gory and are in black and white). Similarly, there is discussion of taxidermy and hunting, with images of dead animals.

A few very mild oaths such as "They'd be damned if they'd give him the medal."

The biography treats its subjects with respect and dignity, evenhandedly examining positive and negative aspects of their characters.

Some of the historical figures spotlighted here had drinking problems, which are discussed but not shown.