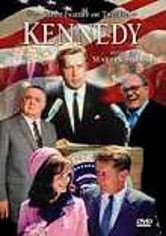 1983 NR 2 discs
Follow the thousand days of John F. Kennedy's (Martin Sheen) presidency in this Golden Globe-winning miniseries that covers the Bay of Pigs aborted overthrow of the Cuban government, the growing crisis in Vietnam, power plays with J. Edgar Hoover and other events. It also delves into the conflicts and tender moments in his marriage to Jacqueline Kennedy (Blair Brown) and the tragedy of his assassination.