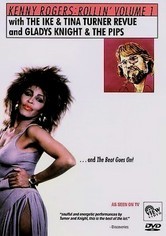 1991 NR 1h 0m DVD
Before he was the Gambler, Kenny Rogers and his band the First Edition hosted the 1970s musical variety show "Rollin' on the River." Revisit the decade as Rogers welcomes Ike and Tina Turner and Gladys Knight and the Pips for soulful pop. Highlights include Ike and Tina performing their signature "Proud Mary" and "Get Back" and Knight singing "I Don't Wanna Do Wrong" and "You're All I Need to Get By."