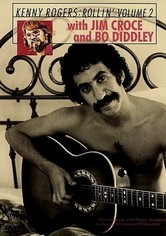 1994 NR 1h 0m DVD
Singer-songwriter Jim Croce, rock 'n' roll great Bo Diddley and rockabilly pioneer Ronnie Hawkins join hosts Kenny Rogers and the First Edition in this collection of performances from the television musical variety series "Rollin' on the River." Croce performs "You Don't Mess Around with Jim" and "Operator"; Diddley rocks "After Midnight"; Hawkins does "Who Wrote the Book of Love"; Rogers and the First Edition sing "Ruben James"; and more.