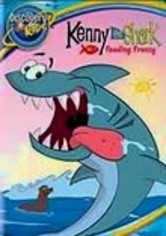 2007 NR 1h 6m DVD
Kenny isn't your usual tiger shark. In fact, he'd rather live on land than in the ocean. As luck would have it, 10-year-old Kat loves undersea creatures, and she takes Kenny in as her new pet. This compilation features three fun-filled episodes of Kenny's adventures with his adoptive family. Produced for the Discovery Kids network, this animated series takes the idea of being a fish out of water literally!