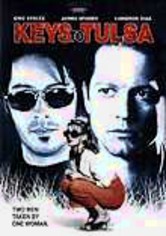 1997 R 1h 53m DVD
Richter Boudreau (Eric Stoltz) is on one bad streak: He languishes in the shadow of his celebrity mother, loses his job as a film critic for the town paper, and now he's been approached with a dangerous proposition... that ultimately leads to blackmail. Richter's best friend Ronnie (James Spader) ropes him into a deceitful plan to land the inheritance of his wife, Vicky (Deborah Kara Unger) -- who's also Richter's ex -- in this steamy thriller.