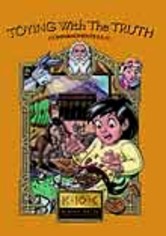 2003 NR 0h 30m DVD
A new toy causes a rift between best friends Seth and Ephraim when Seth, who wants to be the cool kid who has everything, steals the toy. After it breaks, he blames it on his friend, and it isn't until wise toy maker Ben-Ami steps in with some guidance that Seth does the right thing. The fifth installment of the Ten Commandments series illustrates why it's wrong to covet and testify falsely against your neighbor.